Yeah my car has name

Discovered my caster adjustment bolts and rear toe adjusters are seized while trying to get the car prepped for Thunderhill. Trying to decide what the best course of action is now. Thinking of just finding another set of arms, painting them, and replacing everything.


Sillyboybmxer wrote:How many miles did your dad put on that porsche????

. I think it has around 200k on it right now. Gonna try to get some more shots of it next week if I can convince him to come to Thunderhill.


alex.gonzales wrote:All in all, I think we should find other SD members who are willing to meet up and plan something!

Thanks! I think you'll find there are a lot of drivers on this forum. I just put around and try not to crash.

Yeah that sounds awesome. We SD guys should organize a drive one of these days. I've never met or been on a drive with another s2000 enthusiast so that should be a lot of fun. When i first picked up my S i had posted in s2ki to see if anyone was interested in going on a mountain drive, and to my surprise NO ONE was interested.

Well there's a cars and coffee on the 26th of November in La Jolla, at THE Lot. It's a restaurant I think. It's "Lamborghini" day but, there's tons of porsche and makes and models that go. It's from 7-9am. We should meet up!

alex.gonzales wrote:Well there's a cars and coffee on the 26th of November in La Jolla, at THE Lot. It's a restaurant I think. It's "Lamborghini" day but, there's tons of porsche and makes and models that go. It's from 7-9am. We should meet up!

Ahh, I won't be able to make that; getting back from NorCal on the 27th. Is it once a month or every Sunday?

alex.gonzales wrote:Well there's a cars and coffee on the 26th of November in La Jolla, at THE Lot. It's a restaurant I think. It's "Lamborghini" day but, there's tons of porsche and makes and models that go. It's from 7-9am. We should meet up! Thunderhill prep. Who else is going Wednesday?

November was fun a month. Put on about 3,000 miles driving between SD and NorCal, did two track days, and two autocrosses. The car didn't skip a beat, but I really need a new set of tires and pads

Thunderhill/Blacktrax Test and Tune:
Possibly one of the most exciting things I've done, ever. Having only participated in autocross and events at go-kart tracks the speeds at Thunderhill were fairly intimidating at first, especially since I wasn't 100% confident in the Stoptech pads I was running (more on that later...). Jei and the rest of the Black Trax crew (as well as the attendees) were all extremely friendly and willing to share knowledge on how to learn the proper lines and brake points. I had an absolutely fantastic time blasting through the gorgeous scenery to the symphony of VTEC. Sadly I was having some camera issues (go-pro fell off the mount, then the battery died) during my quicker runs so I don't have much footage to share.

Also, it turns out the used Winmax W4s I bought were actually used OEM S2000 pads. Really shitty to learn 24 hours before the event. The seller quickly refunded me and said he must have switched the boxes up, but I'm a little too cynical to believe that. The Stoptech pads were actually fine at Thunderhill given that I was running in the beginner group and on PSS instead of the more popular 200tw tires, but I was still getting fade towards the end of my sessions and pedal feel was pretty terrible on the drive home.

Enjoying the wonderful Sacramento weather before heading up: 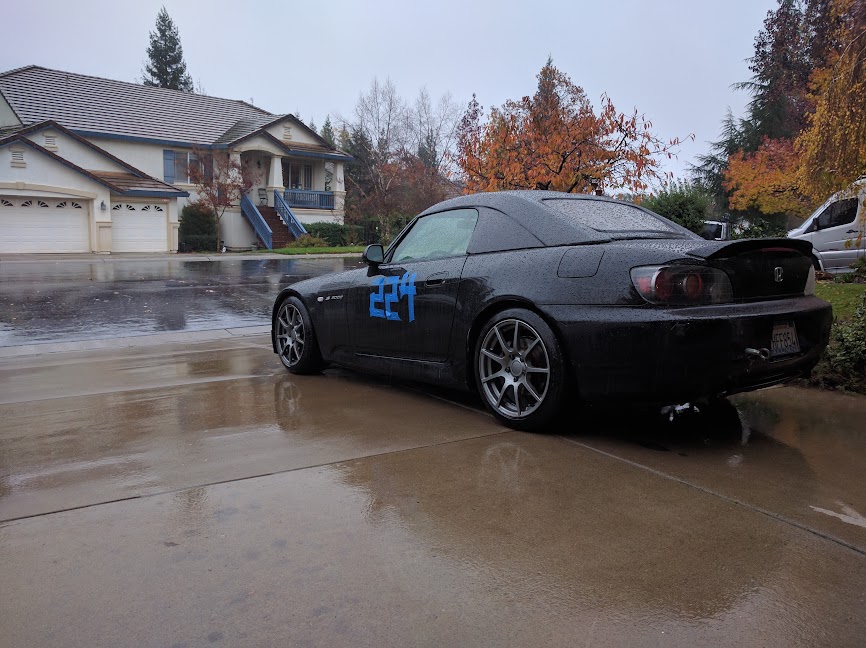 And my favorite shots, courtesy of Bill Wang Photographyhttp://www.billwangphotos.com/blacktrax2016 (How do I turn text into a hyperlink?)


I ended up getting a ride with Jei in his car at the end of the day and it was pretty shocking how much faster a competent driver in a well setup car felt. Braking later everywhere, always on the throttle, counter-steering all over the place. Thunderhill turned into a 90mph rollercoaster

Grange/Racefreely toy drive:
This was my second Racefreely event and despite being fairly ill-prepared I'd say the car did quite well. I somehow lost my lug key after Thunderhill and didn't have time to source new parts between the two events so I was unable to rotate my tires or bleed the brakes, oh well

. After struggling with grip all afternoon I managed to lay down a 1:08.2 which was the 2nd fastest time of the day and 3rd fastest time overall for the club. Only car quicker than me that day was a WS6 Trans Am with a sequential box, 140tw tires, trick suspension and a butt load of power (ran 1:08.1). The reigning time in the club is a 1:08 flat from a S2000 with the standard mods on RS3s. Planning to break into the 1:07s next time I'm out there by improving my lines. I could simply get a set of grippier tires but I'm not 100% certain I want to make that compromise until I pick up a second set of wheels. My PSS are fine for the street but after the last month the car definitely feels looser than it did 9,000 miles ago. Enough text, here are some pictures:

I was surprised by the time since my lines seemed a little sloppy but I'll take it. Hoping the eventual switch to 255s will give me enough extra gear to not run into the limiter before the final turn.

Over the next month or two the car should be going through some changes. First up is a 2001 AP1 front sway bar:

The stiffest OEM front bar (identical to the CR) and about 33% stiffer than 07 OEM front bar. Thought I'd try a relatively subtle increase before jumping to the more popular massive autocross front bars.

Will also be ordering front camber joints (and possibly RCAs) and stiffer front springs. Planning on doing a 11k/10k Eibach setup on my DFVs after riding around in a friend's car.

Not the best picture, but this is how the car sits as of last night: Lowered the car slightly, put the hardtop back on (took it off in February), and picked up a wonderful vanity plate The car was out of commission for a while as I gathered parts to deal with some unforeseen issues. All new motor mounts, new front subframe, new (used) rear LCAs. What was supposed to be a minor job replacing all my rusted alignment bolts turned into big expensive ordeal. I just discovered a torn diff mount as well so my modding budget for the year has been essentially eaten up.

Other significant changes:
-235/40r17 Federal 595 RS-RRs. These are slightly wider and shorter than the 245/40r/17 PSS I was previously running. Really an ideal fit on a 9in wheel in my eyes-perfectly square with the edge of the wheel. I was going to try 255s but Federal's 255 is massive.
-Buddy Club RCAs front and rear
-12k/10k springs (Swift/Ohlins)
-2000 FSB
-Spoon compliance and rear toe arm bushings
-Finished Gernby tune (3,800rpm

Crossed over 74,000 miles on the way to work this morning. The car hasn't felt better. The tune, extra camber, and stickier tires really raised the bar for the car again. 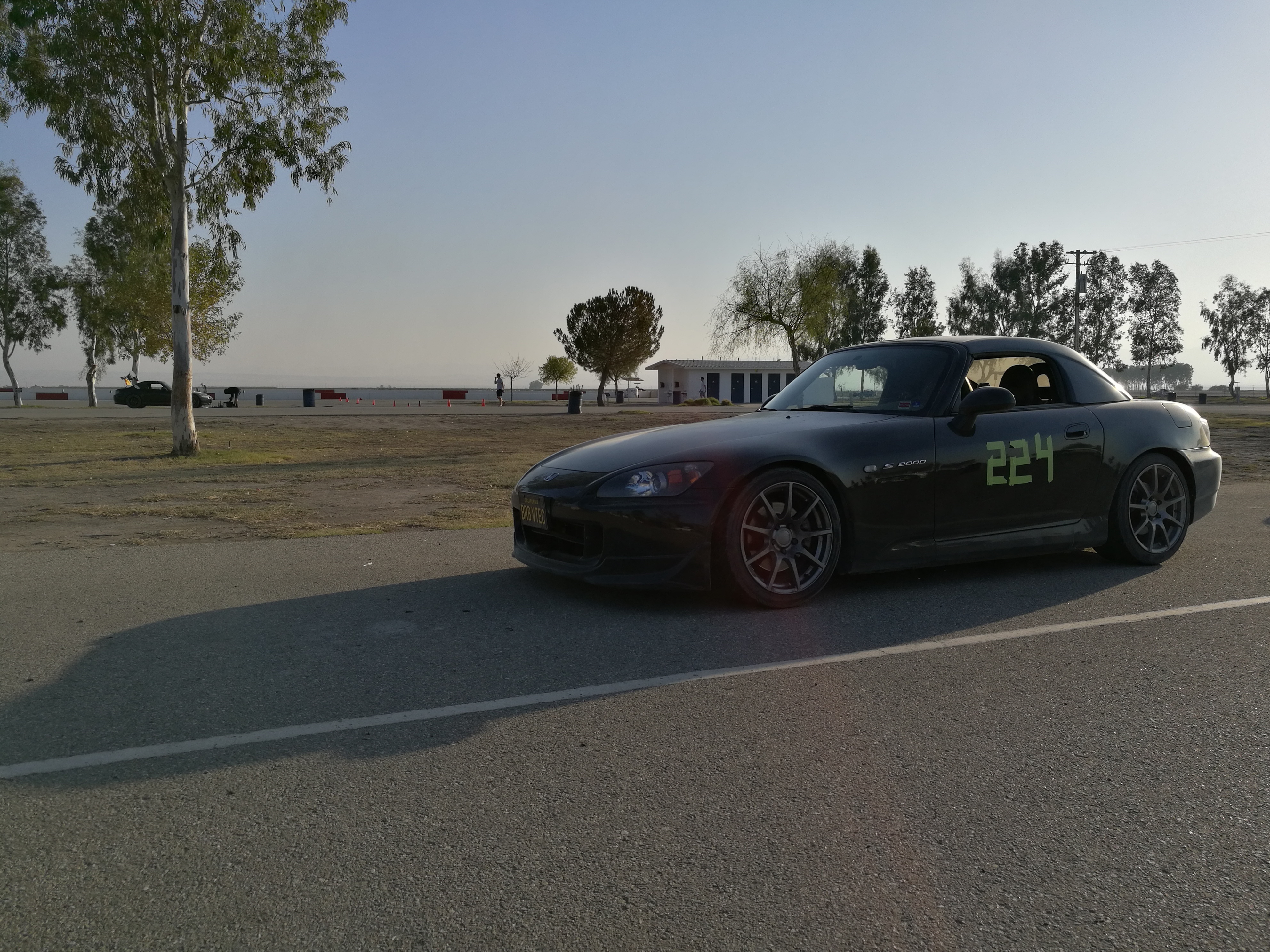 I picked up a set of Tire Rack C4s for dirt cheap to run on the street. I'm still on the fence about actually running them since the design is a little to similar to TE37s (I guess TEs crossed with SSR Type-Cs), but I really just needed an affordable alternative to commuting with 200tw tires. Also heavily considering switching to an AP1 front+lip at some point.

Phil hill is definitely a bit tricky. There is so much time to be saved there once you can really figure it out though.
o_O S2000 | Mark I Stage II... | Touge Map | Parts | S2000 Lap Times Database

It's been a while since I've updated this. It's a shame there isn't much activity here since this is definitely a cleaner site than S2ki.

Picked up a set of TRM C4s as commuter wheels. They've temporarily satiated my need for a set of S2000 friendly SSR Type-Cs: 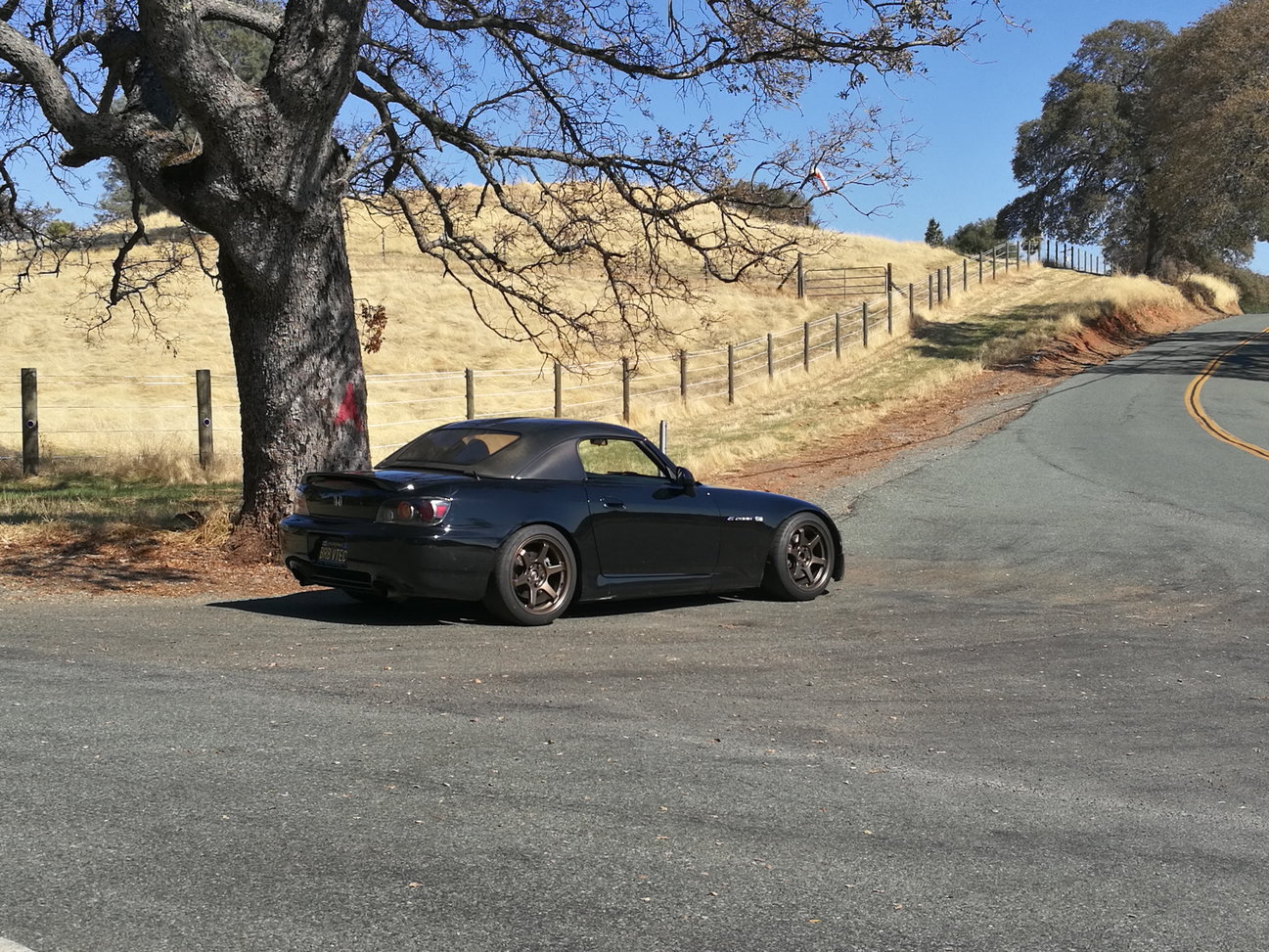 Did some ricer shit and plasti-dipped my track wheels: 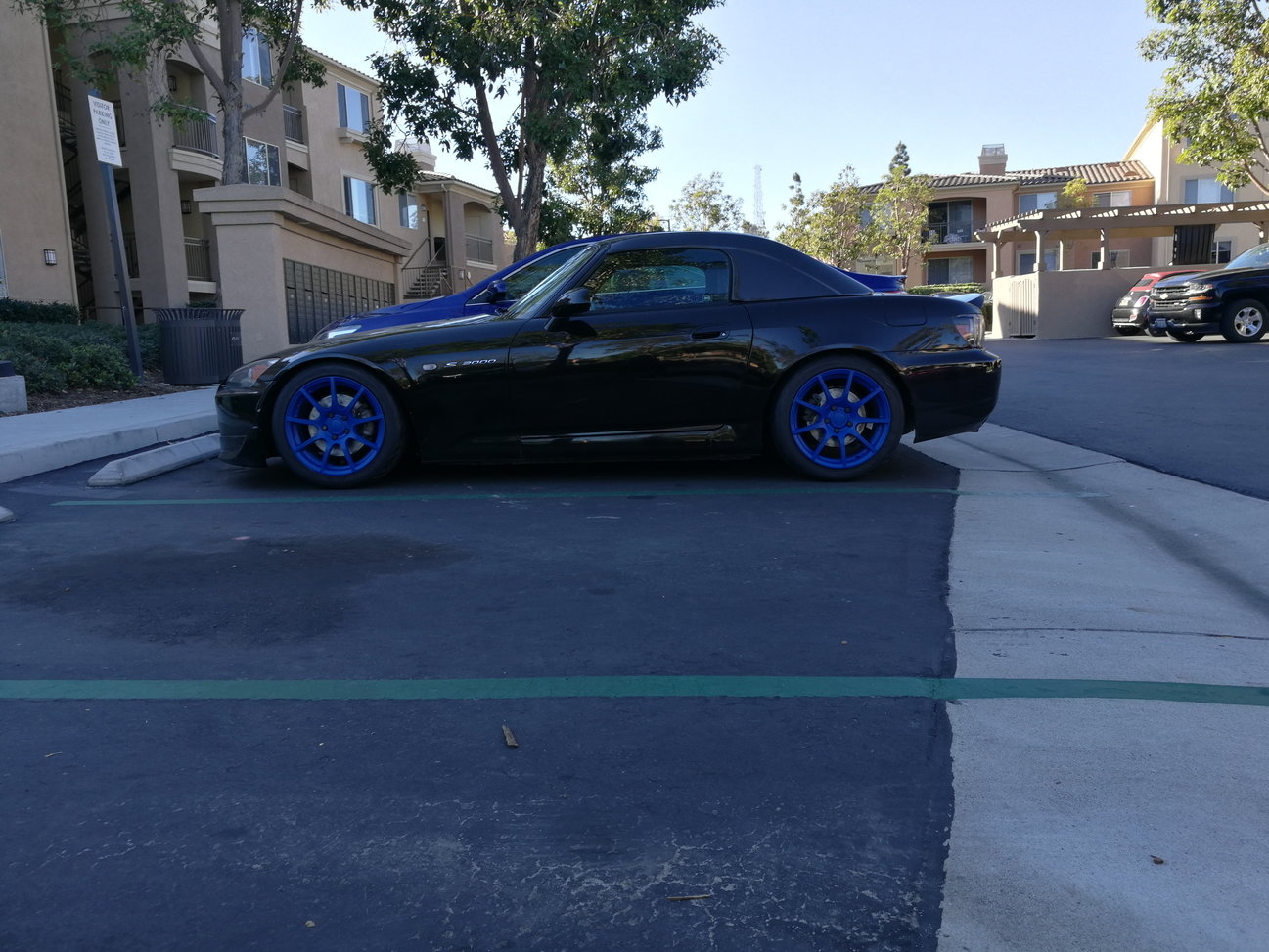 Covered the plasti-dip in brake dust with S2000 friends (Chuckwalla, CW13, and SOW): 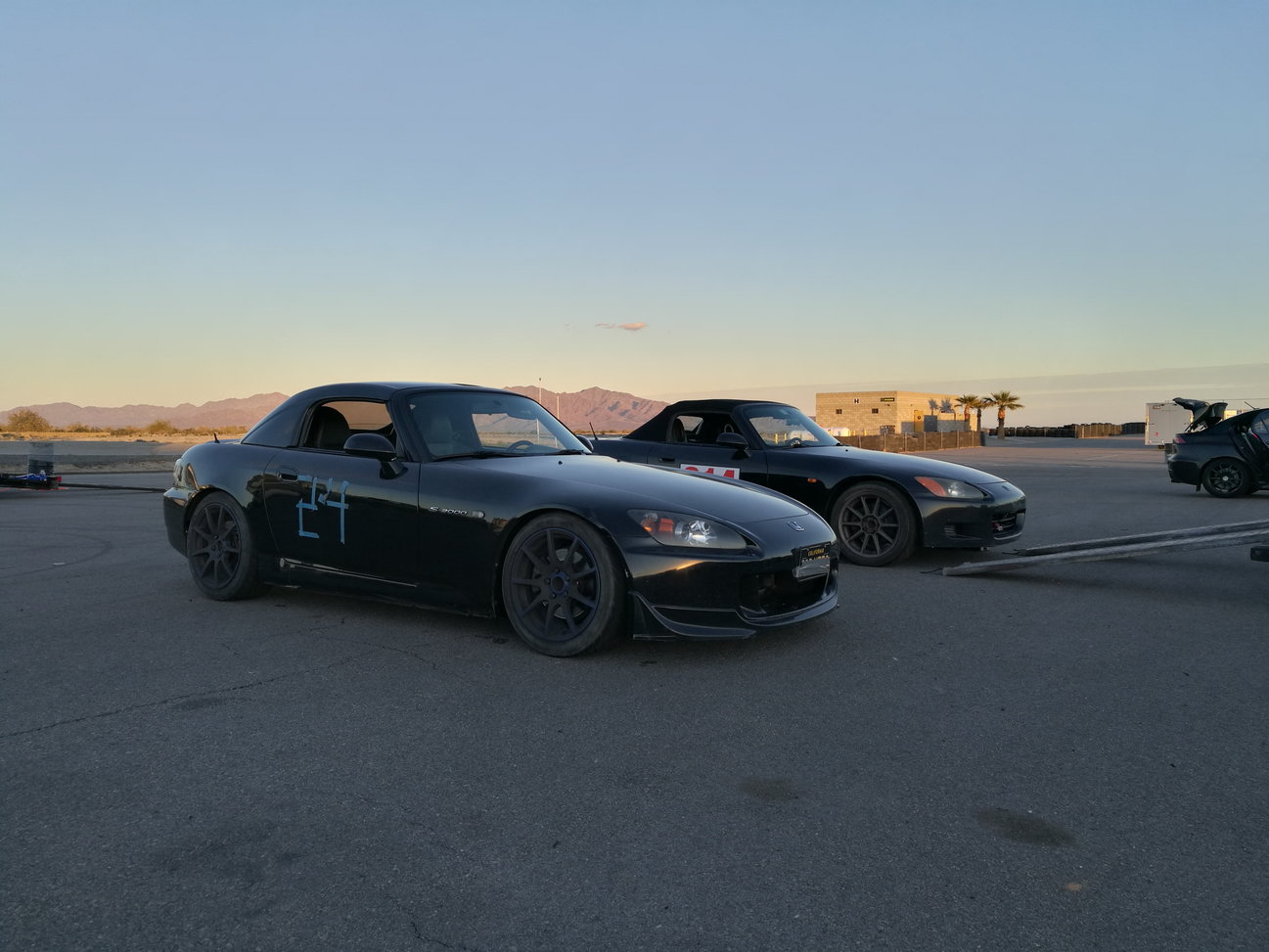 Spent some time in the canyons with two-wheeled friends: 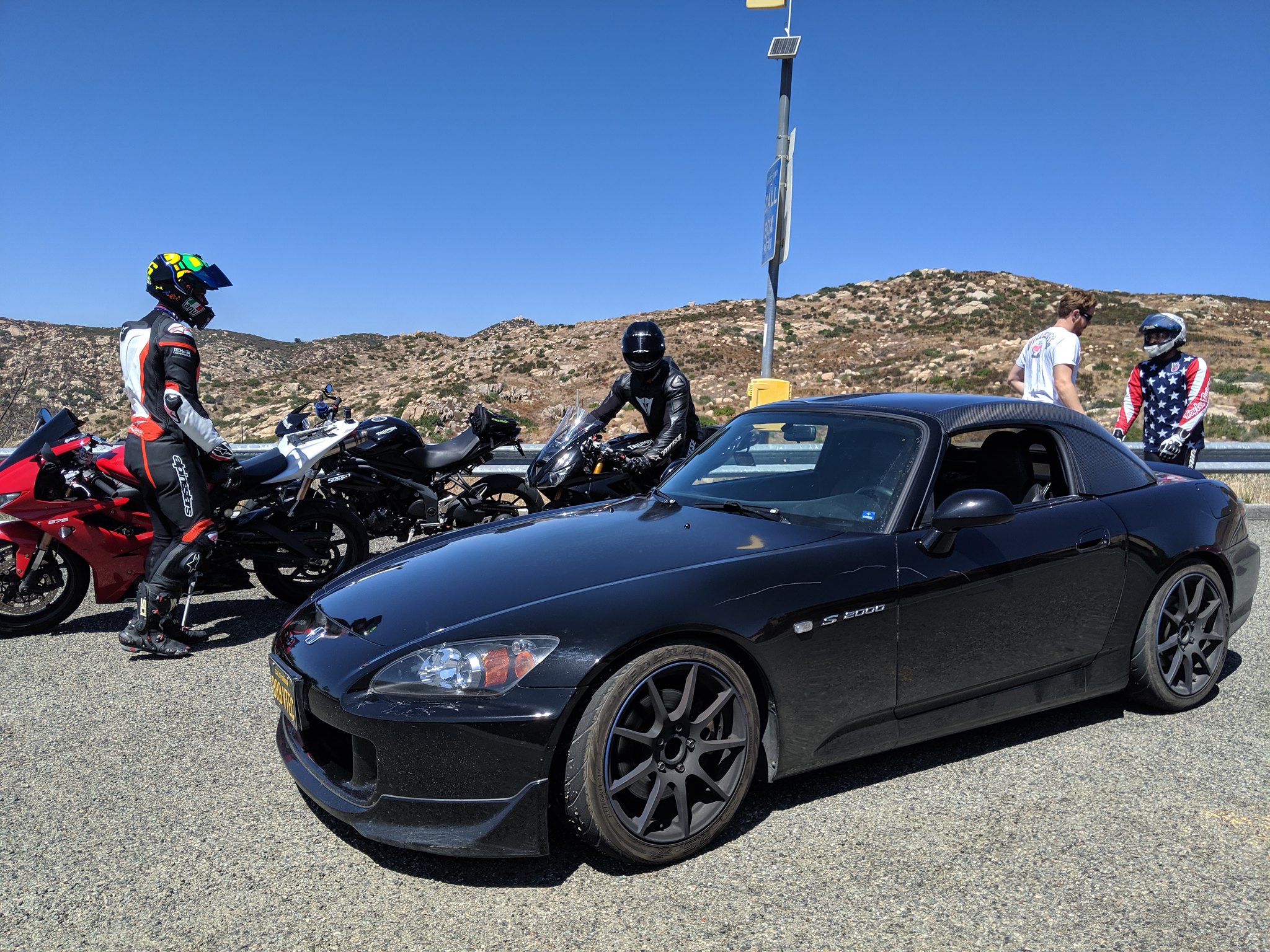 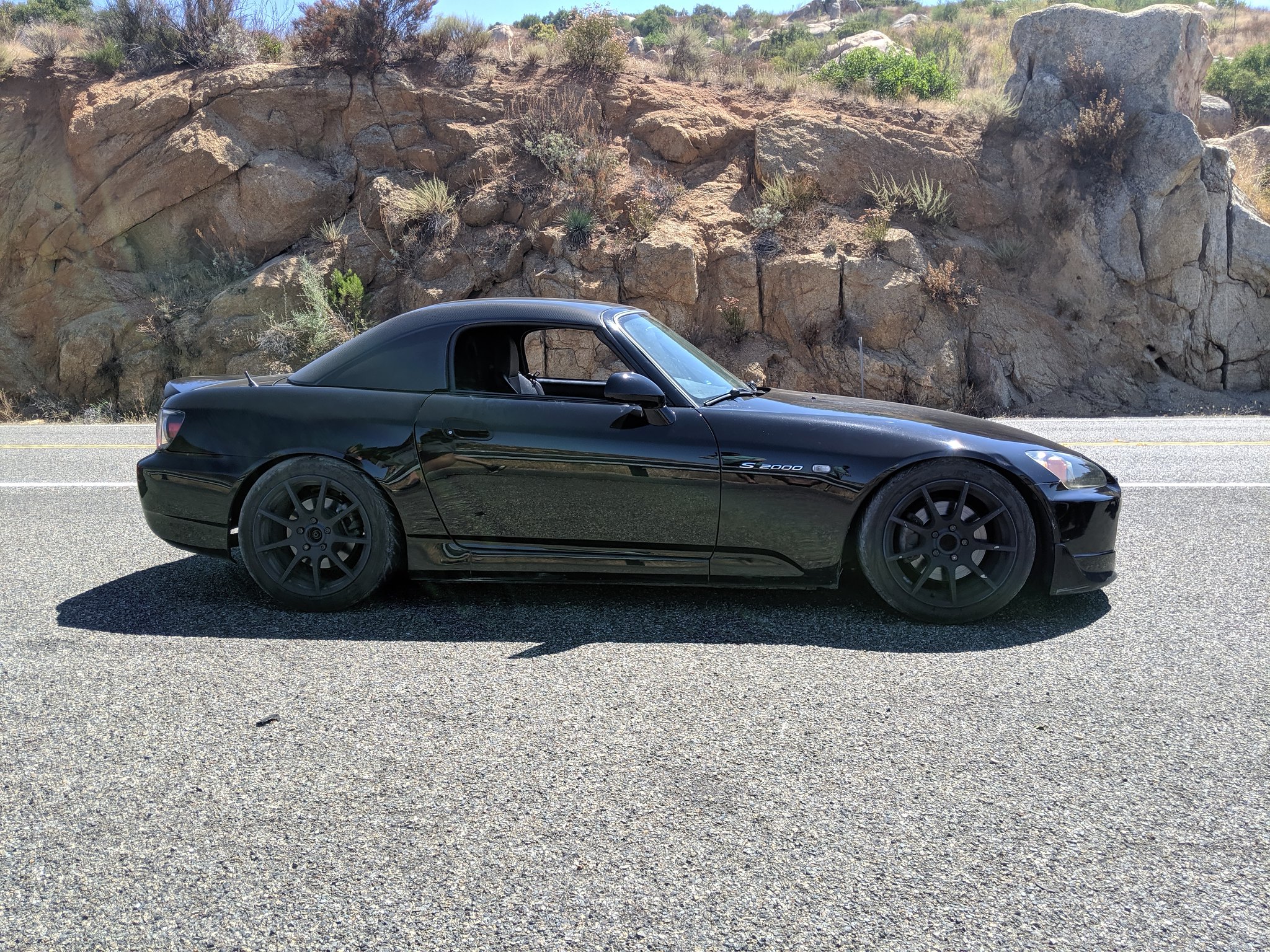 This picture is really pushing me to refinish the track wheels black. Blue was fun but doesn't really hide the dust. 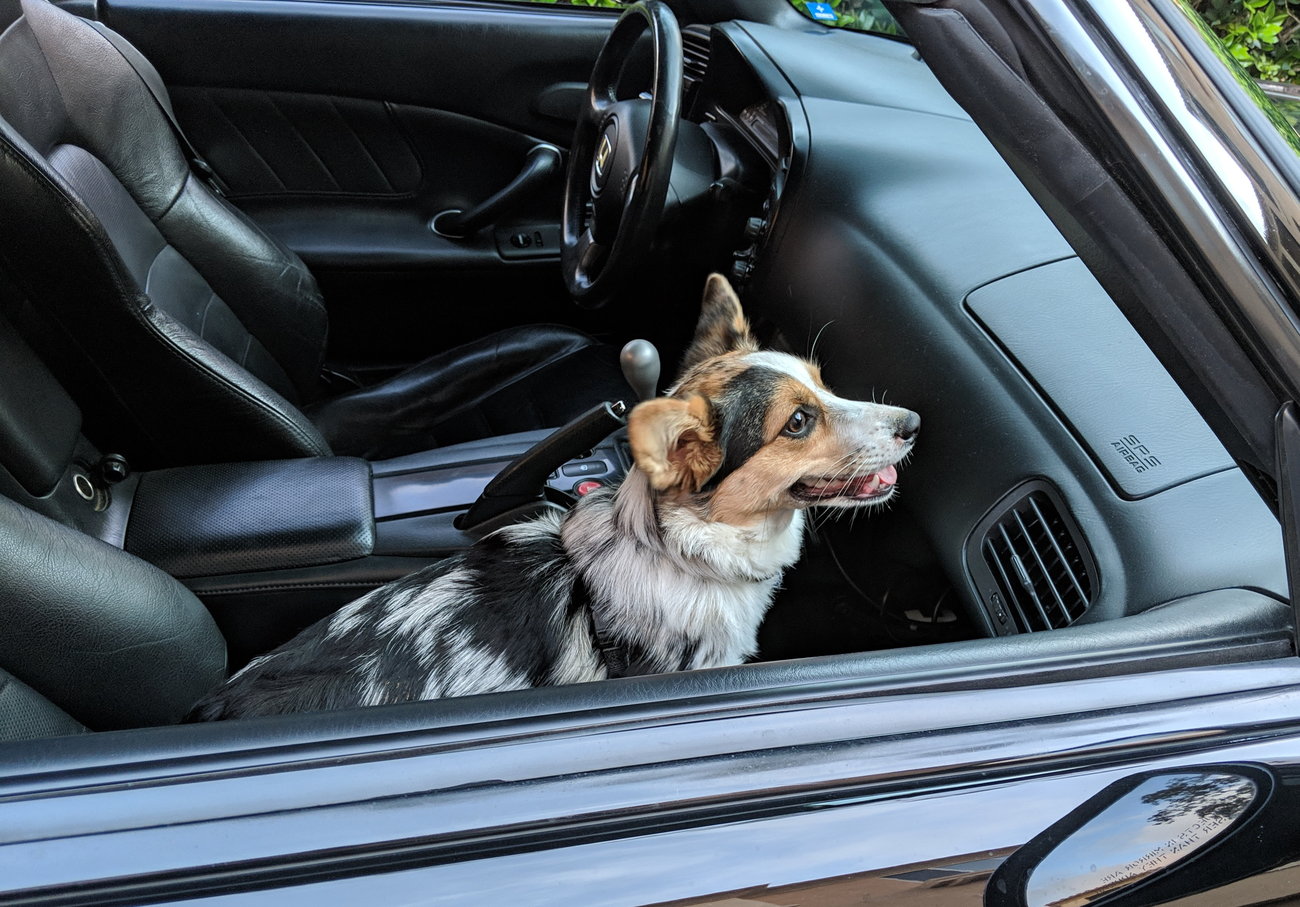 Finally dropped the car off at a body shop to repair the vandalism and 13 years of neglect: 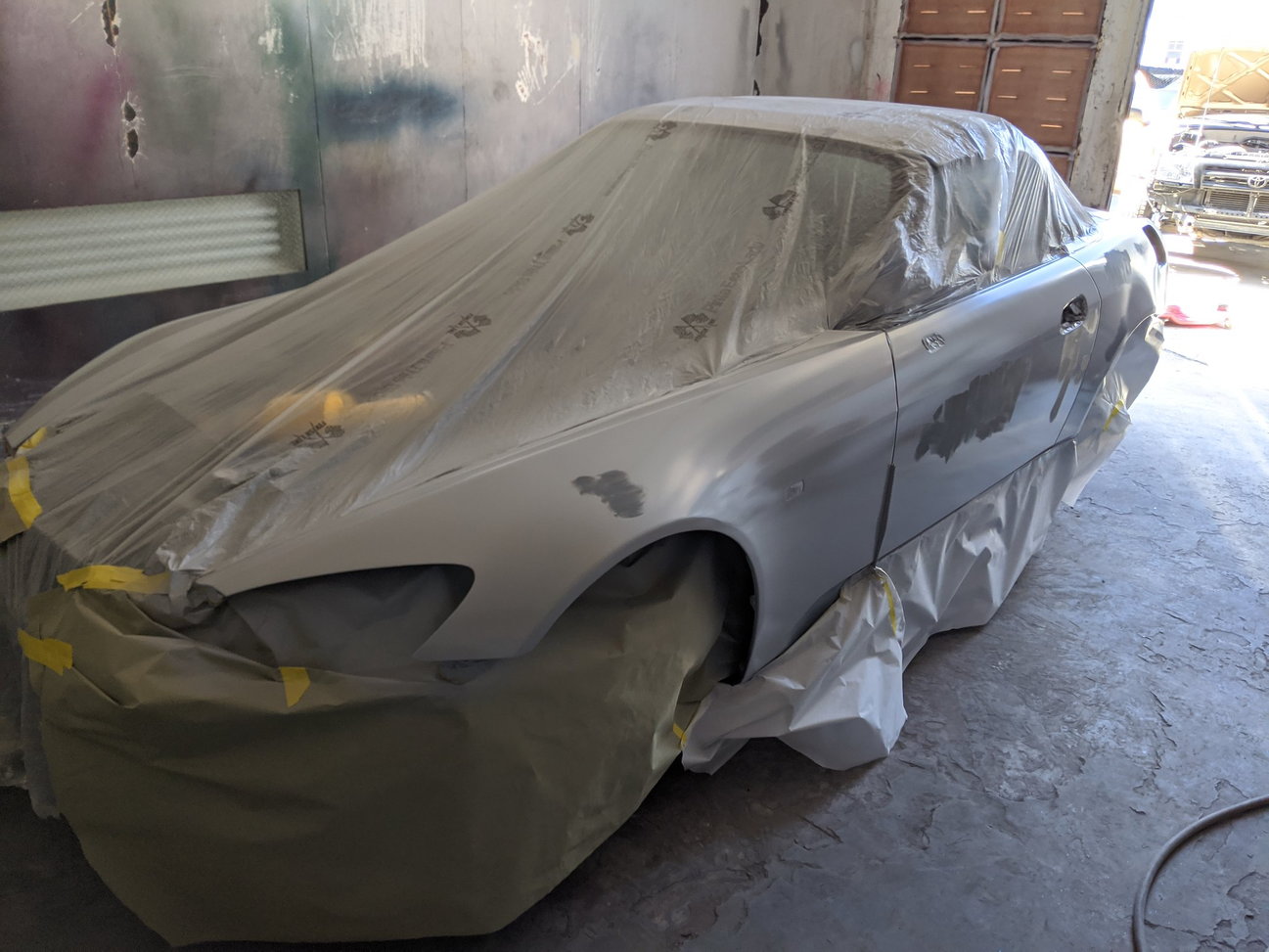 The painter is currently 3 weeks behind schedule, but I was told I should be able to pick up the car next weekend. We'll see 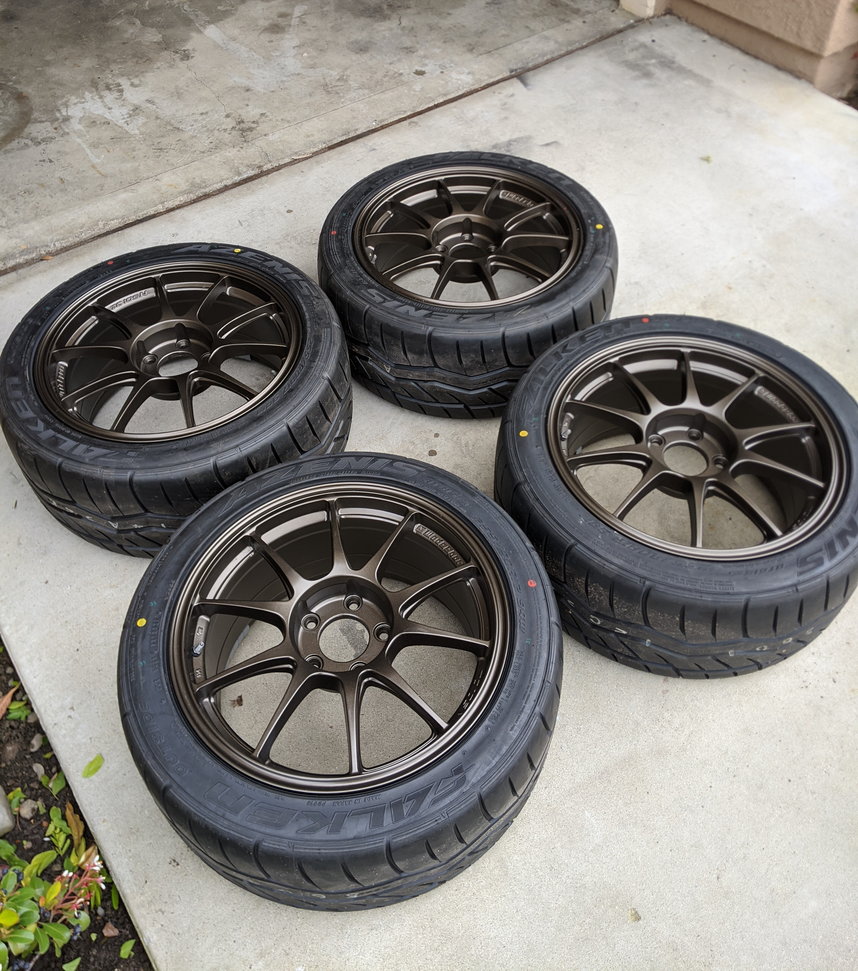 I've been putting these wheels on cars in Forza and Grand Turismo for years now. Feels nice to have a set on a car I actually own.

I'm currently working on retrofitting a set of OEM seals to the Forbidden hardtop and have a small collection of replacement trim pieces and other various OEM bits I'll be installing once I have the car back in my possession. Soft-top delete and exhaust work are also on the to-do list but I might hold off on those two items for a while so I can get back to enjoying the car. I haven't had a chance to drive it in anger since November and it's slowly getting to me. I am really excited to have everything come together; the car is right under 100k miles currently and will be in the best shape it's been in since rolling out of the factory in 2007